Review: Natya Dance’s world premiere ‘Inai’ asks, what if there were no differences, racial or otherwise? 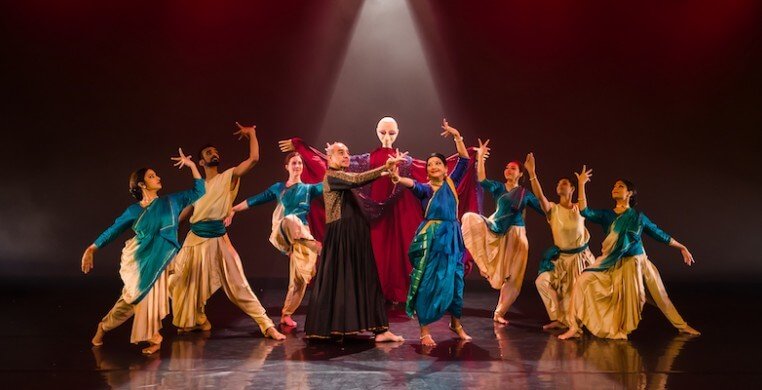 What if we were only human? We had forgotten identity? No land, no borders, no religion, no race? What if the struggle is within us?

A script by Sujatha Vijayaraghavan poses these and other questions, which weave a thread through various sections of “Inai: The Connection,” a new work by Chicago’s leading Bharatanatyam company, Natya Dance Theatre.

Through dynamic dance, puppetry and original music representing a cluster of cultural influences, “Inai” explores tribalism and the real and perceived barriers that separate people by country, culture, race, class and religion.

Natya artistic director Hema Rajagopalan first got the idea for “Inai” while traveling in Europe. She came across a billboard that said, “What is the bridge between thrive and survive?” It led her to think about bridges as a metaphor for promoting understanding between cultures, religions, and even in personal relationships.

It would have been easy for her to create a Bharatanatyam work on the topic, but sticking strictly to her dance form would have basically defeated the purpose. So, Rajagopalan recruited a pioneer in Indian contemporary dance, Astad Deboo, to join for the collaboration, lending his unique blend of Kathak — a dance form from the north of India — with Western modern dance influences.

It’s certainly not the first time Natya has collaborated in this way. There was a 2016 work called “The Incomplete Gesture,” with Indonesia’s Nan Jombang Dance, for example, and, a year later, a trip to India with Mordine & Company at the beginning of the modern dance company’s “Collisions” project.

But it’s been my experience that Natya collaborations are often this-plus-that, a positioning of disparate dance forms side-by-side, avoiding the hard work of really exploring a movement vocabulary wholly different from their own.

There was a little of that here, with solo sections showcasing Deboo and Rajagopalan — each extraordinary, captivating performers — in their respective aesthetics, plus longer sections of Bharatanatyam performed by five Natya dancers.

But upon closer investigation, there’s a quite radical “letting go” in this piece, such that the creative process itself appears to be an example “Inai’s” plea for tolerance and understanding. Dueting together, Deboo and Rajagopalan layer their finely-honed movement vocabularies, one over the other. Hers is rich in gestural storytelling, dynamic facial expressions and percussive, staccato footwork. His is an amalgam of swirling turns, more subdued facial expressions, and softer, but equally articulate gesticulations. Deboo’s aesthetic is more free-flowing, having broken from the strict parameters of kathak long ago, but the two each maintain a playful and curious presence, particularly when they’re accompanied by a larger-than-life puppet operated by Pawan Wagamare.

Throughout each vignette — a prelude and uplifting epilogue bookending sections exploring personal barriers in an intimate relationship, communal barriers between nativist communities, and religious barriers which have, for centuries, incited violence around the world — elders Deboo and Rajagopalan weave their portions throughout series of geometric ensemble dances, and a few duets and solos. Likewise, Wagamare breezes on and off underneath his full-sized puppet, with an unbelievable degree of nuance and dexterity.

A smaller puppet makes appearances in the prelude and epilogue, operated by contemporary dancer and puppeteer Shamsul Shams. Shams also joins in for much of the group dancing; beside Natya’s expert Bharatanatyam dancers, his is a sort of “fake it ‘til you make it” approach, often skipping out entirely on the footwork and mimicking his castmates from the back row.

At first, this was really distracting. Shams is a vibrant and dynamic performer in his own style — apparent in duets with Asha Rowland and Emma Draves. But otherwise tight unisons were pulled out of sync in strictly Bharatanatyam sections. I wondered, aghast, at such an oversight, but then started to observe that throwing a wrench at conformity allowed me to see each Natya dancer individually, and notice the nuances of each in their performance. I saw, like never before, Rowland’s long limbs, the subtle embodiment of Draves’ varied training in ballet and modern, Vidya Govind’s radiant precision, Vinay Srinivasan’s tenacious expressivity and Shantha Nair’s earthly pragmatism. (A disclosure: Asha Rowland is a student at Loyola University Chicago, where I am a faculty member.)

They are a multicultural clan who bring a bit of themselves to traditions which span thousands of years, asking: What is within these ancient music, dance, and scriptures that apply to a globalist society today?

It’s not as simple as abolishing the cultural beliefs and ideologies that make us who we are, or abandoning roots and traditions, but about hearing others and finding the things that make us similar. This was so blatantly clear to me in “Inai’s” exquisite music score, composed by the renowned Carnatic vocalist Sikkil Gurucharan. Gurucharan sings live, joined by Bharatanatyam violinist Sri Kalaiarasan Ramanthan; percussionist Sri G. Vijayaraghavan playing mridangam, a double-sided drum, and reciting vocal rhythms from scripture called Konnakol; and George Brooks, a saxophonist who combines South Asian influences with American jazz music.

It’s an extraordinary collaboration, with the timbres of Brooks’ soprano and tenor saxes melding with the gorgeous tone of Gurucharan’s velvet voice and resonating vibratos from Ramanthan’s violin. And it’s grounded by the rhythm of Vijayaraghavan’s voice and drums, echoed by the feet of the dancers onstage. It’s so beautiful, you can’t help but smile — the dancers, too — even though “Inai” delves into some tricky and potentially cantankerous territory which is likely to raise the noses of Bharanatyam purists. And that’s kind of the point.